We use a 3M M79 mastering magnetic tape recorder in the studio. This example is the reel to reel 2-track version made for mastering with input and output transformers. The 3M M79 is equipped with a remote control so that the tape recorder can be placed in another place than the mastering studio. 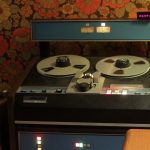 The company is actually named Minnesota mining and manufacturing company but use the short name 3M on their recording devices. The 3M M79 24-track was the first 24-track tape recorder to hit the audio market. It quickly became a studio standard and was used on a numerous recordings. The 3M M79 was extremely popular and was used on numerous Motown recordings, in the rolling stones mobile studio and in Paramount studios in LA to name a few. The rolling stones studio was actually referred to in the deep purple song smoke on the water.

The 3M M79 reel to reel studio recorder was used by:

The main reason that the M79 is so great sounding is the patented isoloop tape path. The rollers and guides are removed from the most crucial places to get a smooth clean tape path. This also minimizes the tape flutter. The sound is clean and punchy with that smooth handling of the highs and lows. This tape recorder is great on almost everything. We love to use it on studio recordings to soften that digital feeling. When driven hard its still very subtle but adds a nice warm sound.