This magical dual mono EQ unit is based on the old Pultec designed EQP-1 tube equalizer designed in 1951 but with 2 channels instead of one. It uses a passive circuit, but includes a tube gain make-up amp to add the lost gain. This adds a warm feeling just by letting the signal pass through the outboard.

According to the manual of the original Pultec EQ it wasn’t supposed to be used with the cut and boost simultaneously. But engineers found that because of the different width of the EQ-curves (Q) and the slightly different frequencies the music got really musical when they both got used at the same time.

The manufacturer of this mastering gear has previously made several Pultec EQP1 style 2 channel clones but was not fully satisfied with the sound of the unit until they changed the output stage with SRPP to 6N6P in triode connection. This specific custom made unit was made with NOS (new old stock) soviet/russian input transformers dated from 1966. 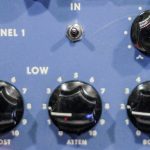 The unit have a circuit with separate boost/cut controls and an inductor based filter for peaking high boost. The combination of the low frequency boost and cut really cleans up in the low mid/mud while focusing the bass. In the high frequencies the inductor filter of the high boost really opens up the high end of the sound. Almost ny good music production will benefit from this fantastic mastering EQ if not just only to let the tubes work their magic of the gain make-up.