In the studio setup we have a matched pair of the Neumann U473, the only compressor ever built by Neumann. These specific compressors were previously owned by a french vinyl pressing plant. 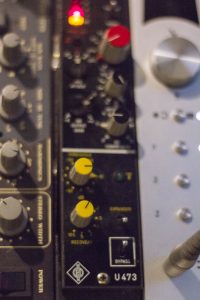 The Neumann U473 was developed in Germany in the 1970’s and was the main limiters for vinyl disc cutting from the late 1970’s and on. The compressor was used to create disc lathe setups and was actually used on 90% of all the records of that time. It was also standard for European mastering and broadcasting.

The Neumann consoles of the time often had a built in U473. For example it was used in the SP 79C disk cutting program control console which was an tape-to-disk control console for cutting lathes.

The sound of these units are transparent yet vintage sounding and works great to glue a mix together. They have a tube-like sound to them even though they are not equipped with tubes. The unit work wonders on mastering, drum overheads and on mix buses. I also heard they work great on vocals though I think the U473 works best when not looking for character and grit on separate tracks.

The U473 is equipped with Neumann designed VCA which gives the unit its high-end sound, right up there with SSL. The compression ratio settings are 1.5:1, 2:1, 3:1 and 5:1. It also features a 1:1 setting (basically bypass) that is actually pretty good at giving that vintage feel without compressing the sound. The attack times are 0.25, 2.5 or 25ms and the release times are 0.1, 0.2, 0.5, 1, 2, 5 and even all the way up to 10seconds. We usually use a modest setting on these units to not over compress the sound.

We love the subtle vintage shine on the dynamics this unit is capable of and look forward to working with it on several mastering projects.