I wanted to test the LANDR EQ algorithm because I've heard so many different theories of how it (and other types of online mastering services) works. Some has even implied that they only throw on a finished EQ curve no matter what you throw in there. I thought this sounded weird and therefore wanted to do some in depth research and testing of the EQ algorithm with the LANDR website and some sinus tones. I will only interpret the handling of the equalisation peaks in these tests.

I made a wave file containing a few sinus tones on different wave lengths. Only sinus tones were used because they doesn't contain any overtones and this kept the graphics more clean.

I made the peaks in the audio reach the same threshold of volume for a better overview in a later stage.

Generation 1, The first master by LANDR. The result looks like a tilt eq was thrown on the mix. This is actually a good process because the audio sent to LANDR was very flat and the human ear like a little tilt in the sound (read more about this under the pink noise headline). The processed file was rendered as an mp3. This is why only the peaks are of relevance in this test.

Generation 2, the first generation master was then sent to LANDR again for mastering. This file should not be touched by LANDR because everything should have been done on the first mastering. But it looks like the audio actually has been going through a similar EQ process again.

Generation 3, the second generation mastering was then sent to mastering by LANDR again and it looks like the same process was made.

Generation 4, by now you would have thought the mastering really should be done with the EQ but it actually keeps tilting the eq.

Initially it looked like LANDR did the best thing for the audio but the process didn't change in the second to fourth generation even though the mastering already had been done. Do they actually only use a tilt eq on everything that is thrown in there?

Generation 5-6, the tilting of the eq is no longer as drastic as before.

Generation 10, the changes of the eq is minimalistic by now. More generations could be done though I believe we can do a good reading out of this.

LANDR eq corrections from generation 1 to 10

Humans percieve pink noise as beeing even or flat but it actually falls of 3dB per octave as opposed to white noise that actually is even. Our hearing is not linear but increases by octaves, this is why pink noise is often used as a reference by mastering engineers. As seen in the picture below it looks like LANDR is actually using pink noise when choosing a eq curve/formula as reference though with a little dip at around 200-300Hz. This is a spot in the frequency spectrum where I often find that it often get cluttered. 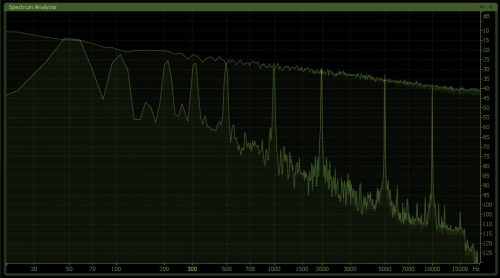 Image of the tenth generation of LANDR mastering and pink noise

Even though we have only done a test with one (original) audio source I think we have enough material to draw a relatively good conclusion. LANDR doesn't change the audio to look exactly like what they prefer but it seems that they do the changes in the direction of their preferred eq curve (that seems to be based on pink noise). This means that the LANDR algorithm only do small "corrections" resulting in the already mastered file doing the same thing again until it reaches its preferred eq setting. You could say that we sent an imitation of white noise and LANDR adjusted it towards pink noise.